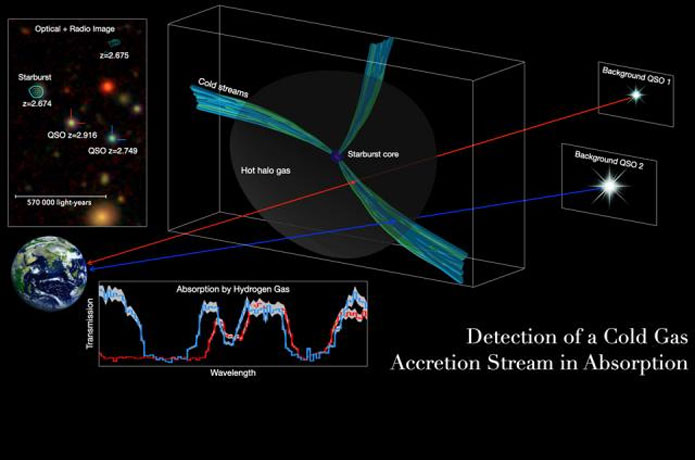 Researchers led by the University of Iowa have detected cosmic pipelines supplying the cold gases necessary for the formation of massive galaxies and the creation of stars. It is the first direct observational evidence of the phenomenon in the early universe.

To come into being, galaxies require cold gas to undergo gravitational collapse. The larger the galaxy, the more cold gas it needs to coalesce and to grow.

Massive galaxies found in the early universe needed a lot—a store of cold molecular gases totaling as much as 100 billion times the mass of our sun.

But where did these early, super-sized galaxies get that much cold gas when they were hemmed in by hotter surroundings?

In a new study, astronomers led by the University of Iowa report direct, observational evidence of streams of cold gas they believe provisioned these early, massive galaxies. They detected cold gas pipelines that knifed through the hot atmosphere in the dark matter halo of an early massive galaxy, supplying the materials for the galaxy to form stars.

About two decades ago, physicists working with simulations theorized that during the early universe, cosmic filaments ferried cold gas and embryonic, node-shaped galaxies to a dark matter halo, where it all clumped together to form massive galaxies. The theory assumed the filaments would need to be narrow and densely filled with cold gas to avoid being peeled off by the hotter surrounding atmosphere.

But the theory lacked direct evidence. In this study, scientists studied a gaseous region surrounding a massive galaxy formed when the universe was about 2.5 billion years old, or just 20% of its present age. The galaxy was previously unstudied, and it took the team five years to pinpoint its exact location and distance (through its redshift). The team needed a specially equipped observatory, the Atacama Large Millimeter/Submillimeter Array, because the target galaxy’s environment is so dusty that it can only be seen in the submillimeter range of the electromagnetic spectrum.

“It is the prototype, the first case where we detected a halo-scale stream that is feeding a very massive galaxy,” says Hai Fu, associate professor in Iowa’s Department of Physics and Astronomy and the study’s lead and corresponding author. “Based on our observations, such streams can fill up the reservoir in about a billion years, which is far shorter than the amount of time that was available to the galaxy at the epoch that we were observing.”

Crucially, the researchers located two background quasars that are projected at close angular distances to the target galaxy, much like how Jupiter and Saturn’s motion drew them closer to each other when viewed from Earth during the Great Conjunction last December. Due to this unique configuration, the quasars’ light penetrating the halo gas of the foreground galaxy left chemical “fingerprints” that confirmed the existence of a narrow stream of cold gas.

Those chemical fingerprints showed the gas in the streams had a low concentration of heavy elements such as aluminum, carbon, iron, and magnesium. Since these elements are formed when the star is still shining and are released into the surrounding medium when the star dies, the researchers determined the cold gas streams must be streaming in from outside, rather than being expelled from the star-making galaxy itself.

“Among the 70,000 starburst galaxies in our survey, this is the only one associated with two quasars that are both nearby enough to probe the halo gas. Even more, both quasars are projected on the same side of the galaxy so that their light can be blocked by the same stream at two different angular distances.” Fu says. “So, I feel extremely fortunate that nature provided us this opportunity to detect this major artery leading to the heart of a phenomenal galaxy during its adolescence.”

The study, “A long stream of metal-poor cool gas around a massive starburst galaxy at Z=2.67,” was published online in the Astrophysical Journal Feb. 24.