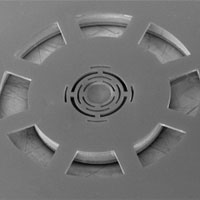 Our experience of space-time is that of a continuous object, without gaps or discontinuities, just as it is described by classical physics. For some quantum gravity models however, the texture of space-time is  'granular ' at tiny scales (below the so-called Planck scale, 10-33 cm), as if it were a variable mesh of solids and voids (or a complex foam). One of the great problems of physics today is to understand the passage from a continuous to a discrete description of spacetime: is there an abrupt change or is there gradual transition? Where does the change occur?

The separation between one world and the other creates problems for physicists: for example, how can we describe gravity -- explained so well by classical physics -- according to quantum mechanics? Quantum gravity is in fact a field of study in which no consolidated and shared theories exist as yet. There are, however,  'scenarios, ' which offer possible interpretations of quantum gravity subject to different constraints, and which await experimental confirmation or confutation.

One of the problems to be solved in this respect is that if space-time is granular beyond a certain scale it means that there is a  'basic scale, ' a fundamental unit that cannot be broken down into anything smaller, a hypothesis that clashes with Einstein's theory of special relativity.

So how can the two be reconciled? Physicists can either hypothesize violations of Lorentz invariance, but have to satisfy very strict constraints (and this has been the preferred approach so far), or they must find a way to avoid the violation and find a scenario that is compatible with both granularity and special relativity. This scenario is in fact implemented by some quantum gravity models such as String Field Theory and Causal Set Theory. The problem to be addressed, however, was how to test their predictions experimentally given that the effects of these theories are much less apparent than are those of the models that violate special relativity. One solution to this impasse has now been put forward by Stefano Liberati, SISSA professor, and colleagues in their latest publication. The study was conducted with the participation of researchers from the LENS in Florence (Francesco Marin and Francesco Marino) and from the INFN in Padua (Antonello Ortolan). Other SISSA scientists taking part in the study, in addition to Liberati, were PhD student Alessio Belenchia and postdoc Dionigi Benincasa. The research was funded by a grant of the John Templeton Foundation.

'We respect Lorentz invariance, but everything comes at a price, which in this case is the introduction of non-local effects, ' comments Liberati. The scenario studied by Liberati and colleagues in fact salvages special relativity but introduces the possibility that physics at a certain point in space-time can be affected by what happens not only in proximity to that point but also at regions very far from it.  'Clearly we do not violate causality nor do we presuppose information that travels faster than light, ' points out the scientist.  'We do, however, introduce a need to know the global structure so as to understand what's going on at a local level. '

From theory to facts

There's something else that makes Liberati and colleagues' model almost unique, and no doubt highly precious: it is formulated in such a way as to make experimental testing possible.  'To develop our reasoning we worked side by side with the experimental physicists of the Florence LENS. We are in fact already working on developing the experiments. ' With these measurements, Liberati and colleagues may be able to identify the boundary, or transition zone, where space-time becomes granular and physics non-local.

'At LENS they're now building a quantum harmonic oscillator: a silicon chip weighing a few micrograms which after being cooled to temperatures close to absolute zero, is illuminated with a laser light and starts to oscillate harmonically ' explains Liberati.  'Our theoretical model accommodates the possibility of testing non-local effects on quantum objects having a non-negligible mass. ' This is an important aspect: a theoretical scenario that accounts for quantum effects without violating special relativity also implies that these effects at our scales must necessarily be very small (otherwise we would already have observed them). In order to test them, we need to be able to observe them in some way or other. According to our model, it is possible to see the effects in 'borderline' objects, that is, objects that are undeniably quantum objects but having a size where the mass -- i.e., the 'charge' associated with gravity (as electrical charge is associated with electrical field) -- is still substantial. '

'On the basis of the proposed model, we formulated predictions about how the system would oscillate, ' says Liberati.  'Two predictions, to be precise: one function that describes the system without non-local effects and one that describes it with local effects. ' The model is particularly robust since, as Liberati explains, the difference in the pattern described in the two cases cannot be generated by environmental influences on the oscillator.  'So it's a 'win-win' situation: if we don't see the effect, we can raise the bar of the energies where to look for the transition. Above all, the experiments being prepared should be able to push the constraints on the non-locality scale to the Planck scale. In this case , we go as far as to exclude these scenarios with non-locality. And this in itself would be a good result, as we would be cutting down the number of possible theoretical scenarios, ' concludes Liberati.  'If on the other hand we were to observe the effect, well, in that case we would be confirming the existence of non-local effects, thus paving the way for an altogether new physics. '