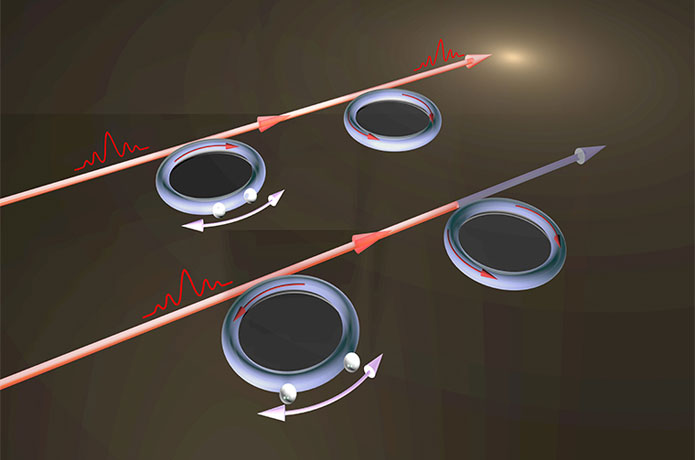 Electromagnetically induced transparency (EIT) is 'tuned' by two particles on the optical resonator. The different locations of particles control the propagation of light in either clockwise or counterclockwise directions, which switch on (upper configuration) or off (lower configuration) the interference of light, leading to controllable brightness (EIT) and darkness in the output. (Image: Yang Lab)

In the quantum realm, under some circumstances and with the right interference patterns, light can pass through opaque media.

This feature of light is more than a mathematical trick; optical quantum memory, optical storage and other systems that depend on interactions of just a few photons at a time rely on the process, called electromagnetically induced transparency, also known as EIT.

Because of its usefulness in existing and emerging quantum and optical technologies, researchers are interested in the ability to manipulate EIT without the introduction of an outside influence, such as additional photons that could perturb the already delicate system. Now, researchers at the McKelvey School of Engineering at Washington University in St. Louis have devised a fully contained optical resonator system that can be used to turn transparency on and off, allowing for a measure of control that has implications across a wide variety of applications.

The group published the results of the research, conducted in the lab of Lan Yang, the Edwin H. & Florence G. Skinner Professor in the Preston M. Green Department of Electrical & Systems Engineering, in a paper titled Electromagnetically Induced Transparency at a Chiral Exceptional Point in the Jan. 13 issue of Nature Physics.

An optical resonator system is analogous to an electronic resonant circuit but uses photons instead of electrons. Resonators come in different shapes, but they all involve reflective material that captures light for a period of time as it bounces back and forth between or around its surface. These components are found in anything from lasers to high precision measuring devices.

For their research, Yang’s team used a type of resonator known as a whispering gallery mode resonator (WGMR). It operates in a manner similar to the whispering gallery at St. Paul’s Cathedral, where a person on one side of the room can hear a person whispering on the other side. What the cathedral does with sound, however, WGMRs do with light — trapping light as it reflects and bounces along the curved perimeter.

In an idealized system, a fiber optic line intersects with a resonator, a ring made of silica, at a tangent. When a photon in the line meets the resonator, it swoops in, reflecting and propagating along the ring, exiting into the fiber in the same direction it was initially headed.

Reality, however, is rarely so neat.

“Fabrication in high quality resonators is not perfect,” Yang said. “There is always some defect, or dust, that scatters the light.” What actually happens is some of the scattered light changes direction, leaving the resonator and travelling back in the direction whence it came. The scattering effects disperse the light, and it doesn’t exit the system.

Imagine a box around the system: If the light entered the box from the left, then exited out the right side, the box would appear transparent. But if the light that entered was scattered and didn’t make it out, the box would seem opaque.

Because manufacturing imperfections in resonators are inconsistent and unpredictable, so too was transparency. Light that enters such systems scatters and ultimately loses its strength; it is absorbed into the resonator, rendering the system opaque.

In the system devised by co-first authors Changqing Wang, a PhD candidate, and Xuefeng Jiang, a researcher in Yang’s lab, there are two WGMRs indirectly coupled by a fiber optic line. The first resonator is higher in quality, having just one imperfection. Wang added a tiny pointed material that acts like a nanoparticle to the high-quality resonator. By moving the makeshift particle, Wang was able to “tune” it, controlling the way the light inside scatters.

Importantly, he was also able to tune the resonator to what’s known as an “exceptional point,” a point at which one and only one state can exist. In this case, the state is the direction of light in the resonator: clockwise or counter clockwise.

For the experiment, researchers directed light toward a pair of indirectly coupled resonators from the left (see illustration). The lightwave entered the first resonator, which was “tuned” to ensure light traveled clockwise. The light bounced around the perimeter, then exited, continuing along the fiber to the second, lower-quality resonator.

There, the light was scattered by the resonator’s imperfections and some of it began traveling counter clockwise along the perimeter. The light wave then returned to the fiber, but headed back toward the first resonator.

Critically, researchers not only used the nanoparticle in the first resonator to make the lightwaves move clockwise, they also tuned it in a way that, as the light waves propagated back and forth between resonators, a special interference pattern would form. As a result of that pattern, the light in the resonators was cancelled out, so to speak, allowing the light traveling along the fiber to eek by, rendering the system transparent.

It would be as if someone shined a light on a brick wall — no light would get through. But then another person with another flashlight shined it in the same spot and, all of a sudden, that spot in the wall became transparent.

One of the more important — and interesting — functions of EIT is its ability to create “slow light.” The speed of light is always constant, but the actual value of that speed can change based on the properties of the medium through which it moves. In a vacuum, light always travels at 300,000,000 meters per second.

With EIT, people have slowed light down to less than eight meters per second, Wang said. “That can have significant influence on the storage of light information. If light is slowed down, we have enough time to use the encoded information for optical quantum computing or optical communication.” If engineers can better control EIT, they can more reliably depend on slow light for these applications.

Manipulating EIT could also be used in the development of long distance communication. A tuning resonator can be indirectly coupled to another resonator kilometers away along the same fiber optic cable. “You could change the transmitted light down the line,” Yang said.

This could be critical for, among other things, quantum encryption.