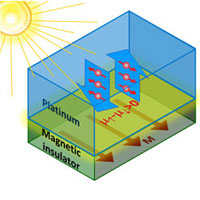 A schematic of the CSU team’s device that demonstrates using light to create a spin current. A spin voltage drives spin-up and spin-down electrons to move in opposite directions, resulting in a pure spin current across a platinum layer.

With apologies to Isaac Asimov, the most exciting phrase to hear in science isn’t “Eureka,” but “That’s funny…”
spin current device

A “that’s funny” moment in a Colorado State University physics lab has led to a fundamental discovery that could play a key role in next-generation microelectronics.
Nature Physics

Publishing in Nature Physics April 25, the scientists led by Mingzhong Wu, professor of physics in CSU’s College of Natural Sciences, are the first to demonstrate using non-polarized light to produce what’s called a spin voltage – a unit of power produced from the quantum spinning of an individual electron. Controlling electron spins for use in memory and logic applications is a relatively new field called spin electronics, or spintronics, and the subject of the 2007 Nobel Prize in Physics.

Spintronics exploits the notion that electron spins can be manipulated and used to process and store information, with a fraction of the power needed in conventional electronics. Wu and his group’s passion is to find new, better ways to control electron spins, the physics of which isn’t yet completely understood.
Next-gen electronics

Consider that the iPhone and every electronic device out there is built upon centuries of science around charge current – positive or negative charges flowing through a device. The perennial problem is the enormous power consumption of charge-current devices, and the electrical resistance that causes power loss in the form of heat – which is why your laptop keeps overheating.

These power and heat barriers limit smaller, more powerful electronics. And that’s why science is turning to spintronics, because it offers a completely new way of making a device work. No charge current is necessary to utilize power from an electron spin. All that’s needed is a magnetic field or a magnetic material, which can orient the spins “up” or “down.” The up and down spins are the analog to positive and negative charges.

Existing methods for creating spin currents include using a charge current (which kind of defeats the purpose), microwaves, or a heat source. But for the first time, the CSU team has used light – or in the quantum world, photons – to generate their spin currents.

Other scientists have done similar things, but with a special kind of polarized light. Here, the CSU scientists used plain unpolarized light – “a halogen bulb purchased at Ace Hardware,” said graduate student David Ellsworth, who is the first author on the paper. They demonstrated a “pure” spin current – involving no charge movement. It was an unprecedented feat.
Curiosity leads to discovery

The breakthrough came about while the scientists were studying spin currents created by the heat from their Ace Hardware bulb. They noticed some background data they couldn’t explain: the “that’s funny” moment.

Ever curious, they checked all possibilities and determined that this seemingly light-induced spin current could be a new quantum phenomenon. They tested it by designing unique control measurements involving different magnetic insulators and metallic thin films, such as platinum. After replicating their results in the lab, they turned to theoreticians at the University of California Irvine and Fudan University to help them interpret the physics of what they’d discovered. These experts became co-authors on the Nature Physics paper.

Wu said the discovery is too new to think about real-world applications; scientists are continuing to make breakthroughs in the theoretical understanding of spin currents. “Just like with the photovoltaic effect when it was first discovered, no one thought at first of a solar cell,” Wu said. “Technologies take time before they are used in real devices. This is a fundamental, new discovery.”

Said Jake Roberts, chair of the CSU Department of Physics: “There have been tremendous technical advances in controlling light. What I see in this discovery is that now, they’ve linked light to spin control. Using a simple light source to produce a spin current offers new opportunities for power control and generation.”
Continuing the inquiry

The researchers will continue exploring making spin currents by swapping out materials and trying different light sources. They demonstrated light control in the infrared range, and moving into the visible or UV range would likely offer more robust applications for devices, Ellsworth said.

“The framework for generating and detecting spin currents is non-trivial,” he explained. “Meanwhile, there are hundreds of years of generating charge currents and knowing how to measure them and manipulate them and characterize them. Spintronics is a new field, and devices are just now coming onto the market that utilize some small part of this.”