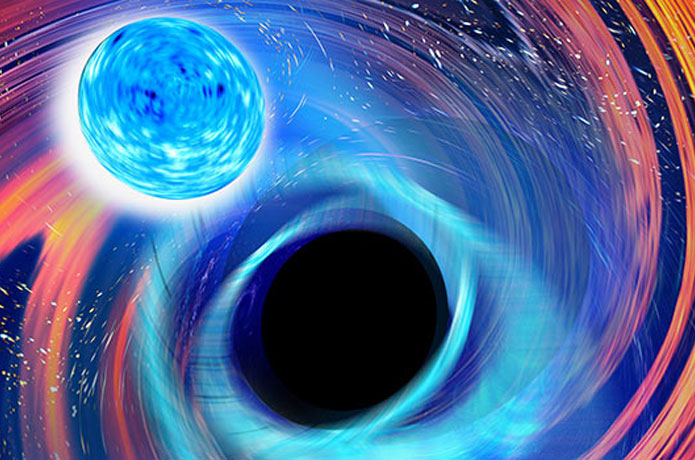 A long time ago, in two galaxies about 900 million light-years away, two black holes each gobbled up their neutron star companions, triggering gravitational waves that finally hit Earth in January 2020.

Discovered by an international team of astrophysicists including Northwestern University researchers, two events — detected just 10 days apart — mark the first-ever detection of a black hole merging with a neutron star. The findings will enable researchers to draw the first conclusions about the origins of these rare binary systems and how often they merge.

“Gravitational waves have allowed us to detect collisions of pairs of black holes and pairs of neutron stars, but the mixed collision of a black hole with a neutron star has been the elusive missing piece of the family picture of compact object mergers,” said Chase Kimball, a Northwestern graduate student who co-authored the study. “Completing this picture is crucial to constraining the host of astrophysical models of compact object formation and binary evolution. Inherent to these models are their predictions of the rates that black holes and neutron stars merge amongst themselves. With these detections, we finally have measurements of the merger rates across all three categories of compact binary mergers."

The research will be published June 29 in the Astrophysical Journal Letters.

The team includes researchers from the LIGO Scientific Collaboration (LSC), the Virgo Collaboration and the Kamioka Gravitational Wave Detector (KAGRA) project. An LSC member, Kimball led calculations of the merger rate estimates and how they fit into predictions from the various formation channels of neutron stars and black holes. He also contributed to discussions about the astrophysical implications of the discovery.

Kimball is co-advised by Vicky Kalogera, the principal investigator of Northwestern’s LSC group, director of the Center for Interdisciplinary Exploration and Research in Astrophysics (CIERA) and the Daniel I. Linzer Distinguished Professor of Physics and Astronomy in the Weinberg Colleges of Arts and Sciences; and by Christopher Berry, an LSC member and the CIERA Board of Visitors Research Professor at Northwestern as well as a lecturer at the Institute for Gravitational Research at the University of Glasgow. Other Northwestern co-authors include Maya Fishbach, a NASA Einstein Postdoctoral Fellow and LSC member.

The team observed the two new gravitational-wave events — dubbed GW200105 and GW200115 — on Jan. 5, 2020, and Jan. 15, 2020, during the second half of the LIGO and Virgo detectors third observing run, called O3b. Although multiple observatories carried out several follow-up observations, none observed light from either event, consistent with the measured masses and distances.

“Following the tantalizing discovery, announced in June 2020, of a black-hole merger with a mystery object, which may be the most massive neutron star known, it is exciting also to have the detection of clearly identified mixed mergers, as predicted by our theoretical models for decades now,” Kalogera said. “Quantitatively matching the rate constraints and properties for all three population types will be a powerful way to answer the foundational questions of origins.”

All three large detectors (both LIGO instruments and the Virgo instrument) detected GW200115, which resulted from the merger of a 6-solar mass black hole with a 1.5-solar mass neutron star, roughly 1 billion light-years from Earth. With observations of the three widely separated detectors on Earth, the direction to the waves’ origin can be determined to a part of the sky equivalent to the area covered by 2,900 full moons.

Just 10 days earlier, LIGO detected a strong signal from GW200105, using just one detector while the other was temporarily offline. While Virgo also was observing, the signal was too quiet in its data for Virgo to help detect it. From the gravitational waves, the astronomers inferred that the signal was caused by a 9-solar mass black hole colliding with a 1.9-solar mass compact object, which they ultimately concluded was a neutron star. This merger happened at a distance of about 900 million light-years from Earth.

Because the signal was strong in only one detector, the astronomers could not precisely determine the direction of the waves’ origin. Although the signal was too quiet for Virgo to confirm its detection, its data did help narrow down the source’s potential location to about 17% of the entire sky, which is equivalent to the area covered by 34,000 full moons.

Where do they come from?

Because the two events are the first confident observations of gravitational waves from black holes merging with neutron stars, the researchers now can estimate how often such events happen in the universe. Although not all events are detectable, the researchers expect roughly one such merger per month happens within a distance of one billion light-years.

While it is unclear where these binary systems form, astronomers identified three likely cosmic origins: stellar binary systems, dense stellar environments including young star clusters, and the centers of galaxies.

The team is currently preparing the detectors for a fourth observation run, to begin in summer 2022.

“We’ve now seen the first examples of black holes merging with neutron stars, so we know that they’re out there,” Fishbach said. “But there’s still so much we don’t know about neutron stars and black holes — how small or big they can get, how fast they can spin, how they pair off into merger partners. With future gravitational wave data, we will have the statistics to answer these questions, and ultimately learn how the most extreme objects in our universe are made.”