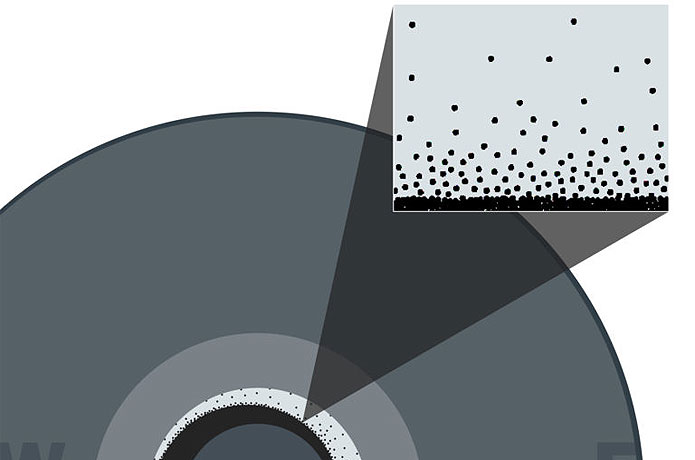 A simplified graphic of the inner Earth as described by the new research. The white and black layers represent a slurry layer containing iron crystals. The iron crystals form in the slurry layer of the outer core (white). These crystals 'snow' down to the inner core, where they accumulate and compact into a layer on top of it (black). The compacted layer is thicker on the western hemisphere of the inner core (W) than on the eastern hemisphere (E).

The Earth’s inner core is hot, under immense pressure and snow-capped, according to new research that could help scientists better understand forces that affect the entire planet.

The snow is made of tiny particles of iron – much heavier than any snowflake on Earth’s surface – that fall from the molten outer core and pile on top of the inner core, creating piles up to 200 miles thick that cover the inner core.

The image may sound like an alien winter wonderland. But the scientists who led the research said it is akin to how rocks form inside volcanoes.

“The Earth’s metallic core works like a magma chamber that we know better of in the crust,” said Jung-Fu Lin, a professor in the Jackson School of Geosciences at The University of Texas at Austin and a co-author of the study.

The study is available online and will be published in the print edition of the journal JGR Solid Earth on December 23.

Youjun Zhang, an associate professor at Sichuan University in China, led the study. The other co-authors include Jackson School graduate student Peter Nelson; and Nick Dygert, an assistant professor at the University of Tennessee who conducted the research during a postdoctoral fellowship at the Jackson School.

The Earth’s core can’t be sampled, so scientists study it by recording and analyzing signals from seismic waves (a type of energy wave) as they pass through the Earth.

However, aberrations between recent seismic wave data and the values that would be expected based on the current model of the Earth’s core have raised questions. The waves move more slowly than expected as they passed through the base of the outer core, and they move faster than expected when moving through the eastern hemisphere of the top inner core.

The study proposes the iron snow-capped core as an explanation for these aberrations. The scientist S.I. Braginkskii proposed in the early 1960s that a slurry layer exists between the inner and outer core, but prevailing knowledge about heat and pressure conditions in the core environment quashed that theory. However, new data from experiments on core-like materials conducted by Zhang and pulled from more recent scientific literature found that crystallization was possible and that about 15% of the lowermost outer core could be made of iron-based crystals that eventually fall down the liquid outer core and settle on top of the solid inner core.

“It’s sort of a bizarre thing to think about,” Dygert said. “You have crystals within the outer core snowing down onto the inner core over a distance of several hundred kilometers.”

The researchers point to the accumulated snow pack as the cause of the seismic aberrations. The slurry-like composition slows the seismic waves. The variation in snow pile size – thinner in the eastern hemisphere and thicker in the western – explains the change in speed.

“The inner-core boundary is not a simple and smooth surface, which may affect the thermal conduction and the convections of the core,” Zhang said.

The paper compares the snowing of iron particles with a process that happens inside magma chambers closer to the Earth’s surface, which involves minerals crystalizing out of the melt and glomming together. In magma chambers, the compaction of the minerals creates what’s known as “cumulate rock.” In the Earth’s core, the compaction of the iron contributes to the growth of the inner core and shrinking of the outer core.

And given the core’s influence over phenomena that affects the entire planet, from generating its magnetic field to radiating the heat that drives the movement of tectonic plates, understanding more about its composition and behavior could help in understanding how these larger processes work.

Bruce Buffet, a geosciences professor at the University of California, Berkley who studies planet interiors and who was not involved in the study, said that the research confronts longstanding questions about the Earth’s interior and could even help reveal more about how the Earth’s core came to be.

“Relating the model predictions to the anomalous observations allows us to draw inferences about the possible compositions of the liquid core and maybe connect this information to the conditions that prevailed at the time the planet was formed,” he said. “The starting condition is an important factor in Earth becoming the planet we know.”