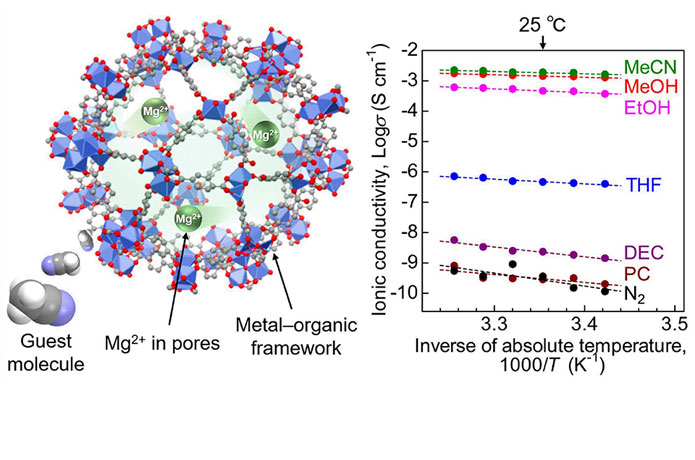 As we move towards a more energy-efficient society, the need for high-capacity, cost-effective batteries is greater than ever. Magnesium is a promising material for such solid-state batteries owing to its abundance, but its practical application is limited by the poor conductivity of magnesium ions (Mg2+) in solids at room temperature. Recently, researchers from Japan have developed a novel Mg2+ conductor with a practically applicable superconductivity of 10-3 S cm-1, overcoming this decades-long roadblock.

The development of highly efficient energy storage devices that can store renewable energy is crucial to a sustainable future. In today's world, solid-state rechargeable lithium ion (Li+) batteries are the state of the art. But lithium is a rare earth metal, and society's dependence on the element is likely to lead to a rapid decline in resources and subsequent price hikes.

Magnesium ion (Mg2+)-based batteries have gained momentum as an alternative to Li+. The earth's crust holds ample magnesium, and Mg2+-based energy devices are said to have high energy densities, high safety, and low cost. But the wide application of Mg2+ is limited by its poor conductivity in solids at room temperature. Mg2+ has poor solid-state conductivity because divalent positive ions (2+) experience strong interactions with their neighboring negative ions in a solid crystal, impeding their migration through the material.

This hurdle was recently overcome by a research team from the Tokyo University of Science (TUS). In their new study published online on 4 May 2022 and on 18 May 2022 in volume 144 issue 19 of the Journal of the American Chemical Society, they report for the first time, a solid-state Mg2+ conductor with superionic conductivity of 10-3 S cm-1 (the threshold for practical application in solid-state batteries). This magnitude of conductivity for Mg2+ conductors is the highest reported to date. According to Junior Associate Professor Masaaki Sadakiyo of TUS, who led the study, "In this work, we exploited a class of materials called metal-organic frameworks (MOFs). MOFs have highly porous crystal structures, which provide the space for efficient migration of the included ions. Here, we additionally introduced a "guest molecule," acetonitrile, into the pores of the MOF, which succeeded in strongly accelerating the conductivity of Mg2+." The research group further included Mr. Yuto Yoshida, also from TUS, Professor Teppei Yamada from The University of Tokyo, and Assistant Professor Takashi Toyao and Professor Ken-ichi Shimizu from Hokkaido University. The paper was made available online on May 4, 2022 and was published in Volume 144 Issue 19 of the journal on May 18, 2022

The team used a MOF known as MIL-101 as the main framework and then encapsulated Mg2+ ions in its nanopores. In the resultant MOF-based electrolyte, Mg2+ was loosely packed, thereby allowing the migration of divalent Mg2+ ions. To further enhance ion conductivity, the research team exposed the electrolyte to acetonitrile vapors, which were adsorbed by the MOF as guest molecules.

The team then subjected the prepared samples to an alternating current (AC) impedance test to measure ionic conductivity. They found that the Mg2+ electrolyte exhibited a superionic conductivity of 1.9 × 10-3 S cm-1. This is the highest ever reported conductivity for a crystalline solid containing Mg2+.

To understand the mechanism behind this high conductivity, the researchers carried out infrared spectroscopic and adsorption isotherm measurements on the electrolyte. The tests revealed that the acetonitrile molecules adsorbed in the framework allowed for the efficient migration of the Mg2+ ions through the body of the solid electrolyte.

These findings of this study not only reveal the novel MOF-based Mg2+ conductor as a suitable material for battery applications, but also provide critical insights into the development of future solid-state batteries. "For a long time, people have believed that divalent or higher valency ions cannot be efficiently transferred through a solid. In this study, we have demonstrated that if the crystal structure and surrounding environment are well-designed, then a solid-state high-conductivity conductor is well within research," explains Dr. Sadakiyo.

When asked about the research group's future plans, he reveals, "We hope to further contribute to society by developing a divalent conductor with even higher ionic conductivity."

We look forward to seeing what they develop next!

News Story Origin and Copyright: TUS JP
Click here for the original news release.
'Every creative act involves ... a new innocence of perception, liberated from the cataract of accepted belief.'