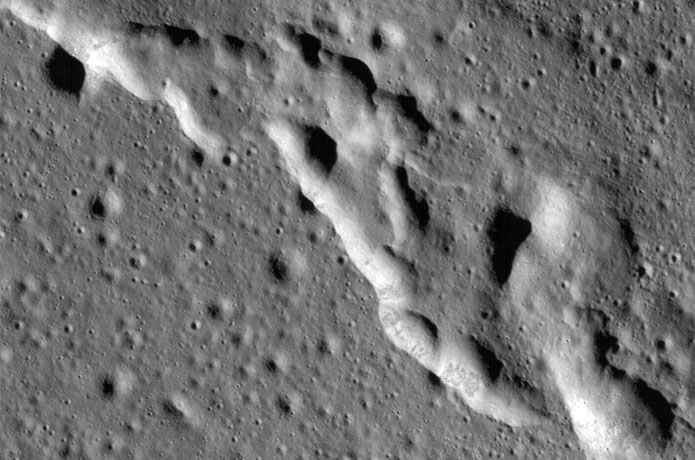 Wrinkle ridges in a region of the Moon called Mare Frigoris. This image was taken by NASA's Lunar Reconnaissance Orbiter (LRO).

Back in 1972, NASA sent their last team of astronauts to the Moon in the Apollo 17 mission. These astronauts brought some of the Moon back to Earth so scientists could continue to study lunar soil in their labs. Since we haven’t returned to the Moon in almost 50 years, every lunar sample is precious. We need to make them count for researchers now and in the future. In a new study in Meteoritics & Planetary Science, scientists found a new way to analyze the chemistry of the Moon’s soil using a single grain of dust. Their technique can help us learn more about conditions on the surface of the Moon and formation of precious resources like water and helium there.

“We’re analyzing rocks from space, atom by atom,” says Jennika Greer, the paper’s first author and a PhD student at the Field Museum and University of Chicago. “ It’s the first time a lunar sample has been studied like this. We’re using a technique many geologists haven’t even heard of.

“We can apply this technique to samples no one has studied,” Philipp Heck, a curator at the Field Museum, associate professor at the University of Chicago, and co-author of the paper, adds. “You’re almost guaranteed to find something new or unexpected. This technique has such high sensitivity and resolution, you find things you wouldn’t find otherwise and only use up a small bit of the sample.”

The technique is called atom probe tomography (APT), and it’s normally used by materials scientists working to improve industrial processes like making steel and nanowires. But its ability to analyze tiny amounts of materials makes it a good candidate for studying lunar samples. The Apollo 17 sample contains 111 kilograms (245 pounds) of lunar rocks and soil—the grand scheme of things, not a whole lot, so researchers have to use it wisely. Greer’s analysis only required one single grain of soil, about as wide as a human hair. In that tiny grain, she identified products of space weathering, pure iron, water and helium, that formed through the interactions of the lunar soil with the space environment. Extracting these precious resources from lunar soil could help future astronauts sustain their activities on the Moon.

To study the tiny grain, Greer used a focused beam of charged atoms to carve a tiny, super-sharp tip into its surface. This tip was only a few hundred atoms wide—for comparison, a sheet of paper is hundreds of thousands of atoms thick. “We can use the expression nanocarpentry,” says Philipp Heck. “Like a carpenter shapes wood, we do it at the nanoscale to minerals.”

Once the sample was inside the atom probe at Northwestern University, Greer zapped it with a laser to knock atoms off one by one. As the atoms flew off the sample, they struck a detector plate. Heavier elements, like iron, take longer to reach the detector than lighter elements, like hydrogen. By measuring the time between the laser firing and the atom striking the detector, the instrument is able to determine the type of atom at that position and its charge. Finally, Greer reconstructed the data in three dimensions, using a color-coded point for each atom and molecule to make a nanoscale 3D map of the Moon dust.

It's the first time scientists can see both the type of atoms and their exact location in a speck of lunar soil. While APT is a well-known technique in material science, nobody had ever tried using it for lunar samples before. Greer and Heck encourage other cosmochemists to try it out. “It’s great for comprehensively characterizing small volumes of precious samples,” Greer says. “We have these really exciting missions like Hayabusa2 and OSIRIS-REx returning to Earth soon—uncrewed spacecrafts collecting tiny pieces of asteroids. This is a technique that should definitely be applied to what they bring back because it uses so little material but provides so much information.”

Studying soil from the moon's surface gives scientists insight into an important force within our Solar System: space weathering. Space is a harsh environment, with tiny meteorites, streams of particles coming off the Sun, and radiation in the form of solar and cosmic rays. While Earth's atmosphere protects us from space weathering, other bodies like the Moon and asteroids don't have atmospheres. As a result, the soil on the Moon’s surface has undergone changes caused by space weathering, making it fundamentally different from the rock that the rest of the Moon is composed of. It’s kind of like a chocolate-dipped ice cream cone: the outer surface doesn’t match what’s inside. With APT, scientists can look for differences between space weathered surfaces and unexposed moon dirt in a way that no other method can. By understanding the kinds of processes that make these differences happen, they can more accurately predict what’s just under the surface of moons and asteroids that are too far away to bring to Earth.

Because Greer’s study used a nanosized tip, her original grain of lunar dust is still available for future experiments. This means new generations of scientists can make new discoveries and predictions from the same precious sample. “Fifty years ago, no one anticipated that someone would ever analyze a sample with this technique, and only using a tiny bit of one grain,” Heck states. “Thousands of such grains could be on the glove of an astronaut, and it would be sufficient material for a big study.”

Greer and Heck emphasize the need for missions where astronauts bring back physical samples because of the variety of terrains in outer space. “If you only analyze space weathering from the one place on the Moon, it’s like only analyzing weathering on Earth in one mountain range,” Greer says. We need to go to other places and objects to understand space weathering in the same way we need to check out different places on Earth like the sand in deserts and outcrops in mountain ranges on Earth.”

We don’t yet know what surprises we might find from space weathering. “It’s important to understand these materials in the lab so we understand what we’re seeing when we look through a telescope,” Greer says. “Because of something like this, we understand what the environment is like on the Moon. It goes way beyond what astronauts are able to tell us as they walk on the Moon. This little grain preserves millions of years of history.

The results from this study convinced NASA to fund the Field Museum and Northwestern team and colleagues from Purdue for the next three years to study different types of lunar dust with APT to quantify its water content and to study other aspects of space weathering.

Funding for this work was provided by the TAWANI Foundation, the National Science Foundation, the Office of Naval Research, Northwestern University and the Field Museum’s Science and Scholarship Funding Committee.