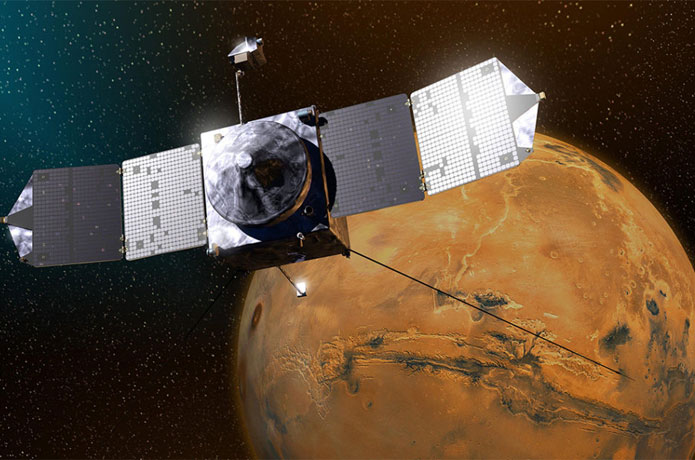 Mars had a global magnetic field much earlier—and much later—in the planet’s history than scientists have previously known.

A planet’s global magnetic field arises from what scientists call a dynamo: a flow of molten metal within the planet’s core that produces an electrical current. On Earth, the dynamo is what makes compass needles point north. But Mars’ dynamo has been extinct for billions of years.

New findings from UBC researchers working with colleagues in the U.S. and France, published today in Science Advances, bring us closer to knowing the precise timing and duration of Mars’ dynamo.

“We find that the Martian dynamo operated at 4.5 billion and 3.7 billion years ago. Dynamo timing is a big part of a planet’s evolution, and what we find is very different from what we have thought so far,” said Anna Mittelholz, postdoctoral fellow in UBC’s department of earth, ocean and atmospheric sciences, and first author of the study. “The dynamo tells us something about the planet’s thermal history, its evolution, and how it got to where it is today, and it is unique for each of the terrestrial planets—Earth, Mars, Venus and Mercury.”

Clues about a planet’s magnetic history lie in magnetized rocks on and beneath its surface. Rock is like a tape recorder, especially volcanic rocks. They begin as lava, but as they cool and solidify in the presence of a magnetic field, minerals within the rocks align themselves with the global magnetic field. By dating these rocks, scientists can estimate if a dynamo was active at the time the rock was emplaced.

Magnetism in certain rocks on Mars’ surface indicate that the Martian dynamo was active between 4.3 and 4.2 billion years ago, but the absence of magnetism over three large basins that formed 3.9 billion years ago has led most scientists to believe the dynamo was inactive by that time.

The researchers also detected low-intensity magnetic fields over the Borealis Basin in the planet’s northern hemisphere, which formed 4.5 billion years ago and is believed to be one of the oldest features on Mars.
Catherine Johnson

“We have these two observations that point to a dynamo at the earliest known time in Mars’ history, and a dynamo that was present half a billion years after many people thought it had already switched off,” said Catherine Johnson, a professor in the department of earth, ocean and atmospheric sciences and senior scientist at the Planetary Science Institute in Tucson, Ariz., who also contributed to the study.

The researchers offer two possible explanations for the absence of magnetic fields over the basins: the dynamo may have stopped before the basins formed and then re-started before Lucus Planum formed, or the impacts that created the basins simply displaced the portion of crust containing minerals that can carry strong magnetism.

The new data for this study come from MAVEN, the Mars Atmosphere and Volatile Evolution satellite. Earlier data about magnetism on Mars had been gathered by the Mars Global Surveyor satellite which orbited the planet between 1999 and 2006, mostly at 400 kilometres above the surface. MAVEN, launched in 2013, operates as close as ~135 kilometres from the surface and picks up weaker signals that MGS could not detect.

MAVEN’s ability to pick up signals from smaller features on and near the surface helps researchers distinguish whether the magnetism is coming from those, or from older rocks buried more deeply in the planet’s crust.

These new insights have researchers wondering what could be revealed if they get even closer. Mittelholz noted that this study focused on two particular features, but craters remain all over Mars with stories to tell. In the future, exploration could progress from satellites to drones or balloons, providing even more detailed data.