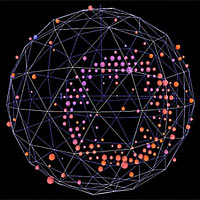 A graphic of a neutrino event recorded by the MiniBooNE experiment. The ring of light, registered by some of the more than 1,000 light sensors inside the detector, indicates the collision of a muon neutrino with an atomic nucleus.

Neutrinos, elementary particles generated by nuclear reactions in the sun, suffer from an identity crisis as they cross the universe, morphing between three different “flavors.” Their antimatter counterparts (which are identical in mass but opposite in charge and spin) do the same thing.

A team of physicists including some from MIT has found surprising differences between the flavor-switching behavior of neutrinos and antineutrinos. If confirmed, the finding could help explain why matter, and not antimatter, dominates our universe.

“People are very excited about it because it suggests that there are differences between neutrinos and antineutrinos,” says Georgia Karagiorgi, an MIT graduate student and one of the leaders of the analysis of experimental data produced by the Booster Neutrino Experiment (MiniBooNE) at the Fermi National Accelerator Laboratory.

The new result, announced in June and submitted to the journal Physical Review Letters, appears to be one of the first observed violations of CP symmetry: the theory that matter and antimatter should behave in the same way. CP symmetry violation has been seen before in quarks, another type of elementary particle that makes up protons and neutrons, but never in neutrinos or electrons.

The finding could also force physicists to revise their Standard Model, which catalogs all of the known particles that make up matter. The model now posits only three flavors of neutrino, but a fourth (or fifth or sixth) may be necessary to explain the new results.

“If this should be proven to be correct, it would have major implications for particle physics,” says John Learned, professor of physics at the University of Hawaii, who is not part of the MiniBooNE team.

So far, the researchers have enough data to present their results with a confidence level of just below 99.7 percent (also called 3 sigma), which is not high enough to claim a new discovery. To reach that level, 5-sigma confidence (99.99994 percent) is required. “People are going to rightfully demand a really clean, 5-sigma result,” says Learned.

Since the 1960s, physicists have been gathering evidence that neutrinos can switch, or oscillate, between three different flavors — muon, electron and tau, each of which has a different mass. However, they have not yet been able to rule out the possibility that more types of neutrino might exist.

In an effort to help nail down the number of neutrinos, MiniBooNE physicists send beams of neutrinos or antineutrinos down a 500-meter tunnel, at the end of which sits a 250,000-gallon tank of mineral oil. When neutrinos or antineutrinos collide with a carbon atom in the mineral oil, the energy traces left behind allow physicists to identify what flavor of neutrino took part in the collision. Neutrinos, which have no charge, rarely interact with other matter, so such collisions are rare.

MiniBooNE was set up in 2002 to confirm or refute a controversial finding from an experiment at the Liquid Scintillator Neutrino Detector (LSND) at Los Alamos National Laboratory. In 1990, the LSND reported that a higher-than-expected number of antineutrinos appeared to be oscillating over relatively short distances, which suggests the existence of a fourth type of neutrino, known as a “sterile” neutrino.

In 2007, MiniBooNE researchers announced that their neutrino experiments did not produce oscillations similar to those seen at LSND. At the time, they assumed the same would hold true for antineutrinos. “In 2007, I would have told you that you can pretty much rule out LSND,” says MIT physics professor Janet Conrad, a member of the MiniBooNE collaboration and an author of the new paper.

MiniBooNE then switched to antineutrino mode and collected data for the next three years. The research team didn’t look at all of the data until earlier this year, when they were shocked to find more oscillations than would be expected from only three neutrino flavors — the same result as LSND.

Already, theoretical physicists are posting papers online with theories to account for the new results. However, “there’s no clear and immediate explanation,” says Karsten Heeger, a neutrino physicist at the University of Wisconsin. “To nail it down, we need more data from MiniBooNE, and then we need to experimentally test it in a different way.”

The MiniBooNE team plans to collect antineutrino data for another 18 months. Conrad also hopes to launch a new experiment that would use a cyclotron, a type of particle accelerator in which particles travel in a circle instead of a straight line, to help confirm or refute the MiniBooNE results.