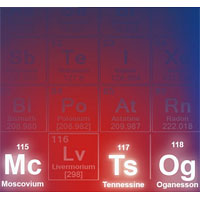 The International Union of Pure and Applied Chemistry (IUPAC) opened a public comment period Wednesday for the recommended names of elements 115, 117 and 118.

Moscovium (Mc) is provisionally recommended for element 115 in recognition of the Moscow region and the ancient Russian land that is home to JINR. Moscow is the capital of the region.

Tennessine (Ts) is proposed for element 117, recognizing the contribution of Tennessee research centers ORNL, Vanderbilt and the University of Tennessee to superheavy element research.

The provisional name for element 118 is Oganesson (Og), in recognition of the pioneering contributions of Yuri Oganessian to superheavy element research. Oganessian’s vision and determination created opportunity for the significant expansion of the periodic table and knowledge of superheavy nuclei.

The provisional names will undergo a statutory period for public review before the names and symbols can be finally approved by the IUPAC Council – likely later this year.

“I’m proud of all of the hard work that this group has done over the years performing these experiments,” said Dawn Shaughnessy,” LLNL’s principal investigator for the Heavy Element Group. “It’s a huge accomplishment for the entire group that we are recognized for our efforts in accomplishing these highly difficult experiments and for the years of work it takes to successfully create a new chemical element.”

The new elements and nuclei will complete the seventh row of the periodic table, and provides evidence for the long sought “island of stability” for superheavy elements. Two members of the team, JINR and LLNL, were previously credited with the discovery of elements 114 (flerovium) and 116 (livermorium).

The concept of the “island of stability” was originally proposed in the 1960s. It predicts increased stability for superheavy nuclei at higher neutron and proton numbers. The new nuclei produced in this research exhibit substantially increased lifetimes consistent with approaching the 'island.'

These new elements were discovered using the “hot fusion” approach, developed and implemented by Oganessian at JINR. This approach involves heavy ion reactions of an intense, high-energy calcium beam on rare actinide targets including berkelium and californium at the Dubna Gas-Filled Recoil Separator.