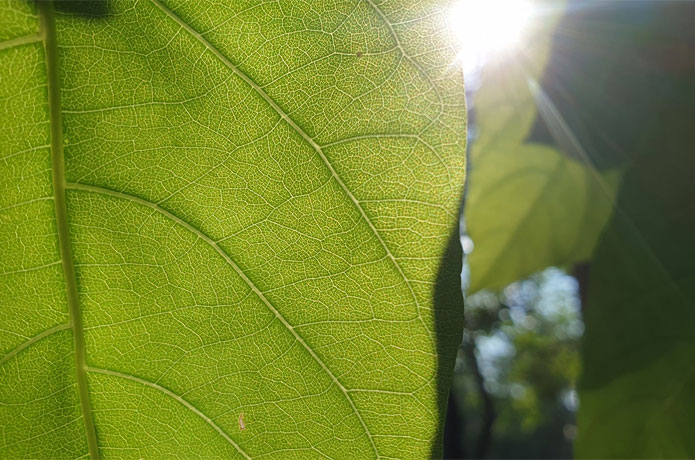 Researchers solve a critical part of the mystery of photosynthesis, uncovering an engineered version of a protein complex that switches the use of photosynthetic pathways. This discovery could improve human-made devices such as solar panels and sensors. (Image by Shutterstock/Quality Stock Arts.)

Plants have been harnessing the sun’s energy for hundreds of millions of years.

Algae and photosynthetic bacteria have been doing the same for even longer, all with remarkable efficiency and resiliency.

It’s no wonder, then, that scientists have long sought to understand exactly how they do this, hoping to use this knowledge to improve human-made devices such as solar panels and sensors.

“We have a tremendous opportunity here to open up completely new disciplines of light-driven biochemical reactions, ones that haven’t been envisioned by nature. If we can do that, that’s huge.” — Argonne biophysicist Philip Laible

Scientists from the U.S. Department of Energy’s (DOE) Argonne National Laboratory, working closely with collaborators at Washington University in St. Louis, recently solved a critical part of this age-old mystery, homing in on the initial, ultrafast events through which photosynthetic proteins capture light and use it to initiate a series of electron transfer reactions.

“In order to understand how biology fuels all of its engrained activities, you must understand electron transfer,” said Argonne biophysicist Philip Laible. ?“The movement of electrons is crucial: it’s how work is accomplished inside a cell.”

In photosynthetic organisms, these processes begin with the absorption of a photon of light by pigments localized in proteins.

Each photon propels an electron across a membrane located inside specialized compartments within the cell.

“The separation of charge across a membrane — and stabilization of it — is critical as it generates energy that fuels cell growth,” said Argonne biochemist Deborah Hanson.

The Argonne and Washington University research team has gained valuable insight on the initial steps in this process: the electron’s journey.

Nearly 35 years ago, when the first structure of these types of complexes was unveiled, scientists were surprised to discover that after the absorption of light, the electron transfer processes faced a dilemma: there are two possible pathways for the electron to travel.

In nature, plants, algae and photosynthetic bacteria use just one of them — and scientists had no idea why.

What they did know was that the propulsion of the electron across the membrane — effectively harvesting the energy of the photon — required multiple steps.

Argonne and Washington University scientists have managed to interfere with each one of them to change the electron’s trajectory.

“We’ve been on this trail for more than three decades, and it is a great accomplishment that opens up many opportunities,” said Dewey Holten, a chemist at Washington University.

The scientists’ recent article, ?“Switching sides—Reengineered primary charge separation in the bacterial photosynthetic reaction center,” published in the Proceedings of the National Academy of Sciences, shows how they discovered an engineered version of this protein complex that switched the utilization of the pathways, enabling the one that was inactive while disabling the other.

“It is remarkable that we have managed to switch the direction of initial electron transfer,” said Christine Kirmaier, Washington University chemist and project leader. ?“In nature, the electron chose one path 100 percent of the time. But through our efforts, we have been able to make the electron switch to an alternate path 90 percent of the time. These discoveries pose exciting questions for future research.”

As a result of their efforts, the scientists are now closer than ever to being able to design electron transfer systems in which they can send an electron down a pathway of their choosing.

“This is important because we are gaining the ability to harness the flow of energy to understand design principles that will lead to new applications of abiotic systems,” Laible said. ?“This would allow us to greatly improve the efficiency of many solar-powered devices, potentially making them far smaller. We have a tremendous opportunity here to open up completely new disciplines of light-driven biochemical reactions, ones that haven’t been envisioned by nature. If we can do that, that’s huge.”

The research was sponsored by DOE’s Office of Science.