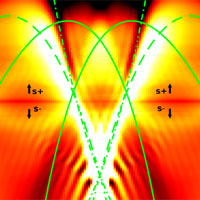 Researchers have observed quantum effects in electrons by squeezing them into one-dimensional ‘quantum wires’ and observing the interactions between them. The results could be used to aid in the development of quantum technologies, including quantum computing.

Scientists have controlled electrons by packing them so tightly that they start to display quantum effects, using an extension of the technology currently used to make computer processors. The technique, reported in the journal Nature Communications, has uncovered properties of quantum matter that could pave a way to new quantum technologies.

The ability to control electrons in this way may lay the groundwork for many technological advances, including quantum computers that can solve problems fundamentally intractable by modern electronics. Before such technologies become practical however, researchers need to better understand quantum, or wave-like, particles, and more importantly, the interactions between them.

Squeezing electrons into a one-dimensional ‘quantum wire’ amplifies their quantum nature to the point that it can be seen, by measuring at what energy and wavelength (or momentum) electrons can be injected into the wire.

“Think of a crowded train carriage, with people standing tightly packed all the way down the centre of the carriage,” said Professor Christopher Ford of the University of Cambridge’s Cavendish Laboratory, one of the paper’s co-authors. “If someone tries to get in a door, they have to push the people closest to them along a bit to make room. In turn, those people push slightly on their neighbours, and so on. A wave of compression passes down the carriage, at some speed related to how people interact with their neighbours, and that speed probably depends on how hard they were shoved by the person getting on the train. By measuring this speed, one could learn about the interactions.”

“The same is true for electrons in a quantum wire – they repel each other and cannot get past, so if one electron enters or leaves, it excites a compressive wave like the people in the train,” said the paper’s first author Dr Maria Moreno, also from the Cavendish Laboratory.

However, electrons have another characteristic, their angular momentum or ‘spin’, which also interacts with their neighbours. Spin can also set off a wave carrying energy along the wire, and this spin wave travels at a different speed to the charge wave. Measuring the wavelength of these waves as the energy is varied is called tunnelling spectroscopy. The separate spin and charge waves were detected experimentally by researchers from Harvard and Cambridge Universities.

Now, in the paper published in Nature Communications, the Cambridge researchers have gone one stage further, to test the latest predictions of what should happen at high energies, where the original theory breaks down.

A flurry of theoretical activity in the past decade has led to new predictions of other ways of exciting waves among the electrons — it’s as if the person entering the train pushes so hard some people fall over and knock into others much further down the carriage. These new ‘modes’ are weaker than the spin and charge waves and so are harder to detect.

The collaborators of the Cambridge researchers from the University of Birmingham predicted that there would be a hierarchy of modes corresponding to the variety of ways in which the interactions can affect the quantum-mechanical particles, and the weaker modes should be strongest in very short wires.

To make a set of such short wires, the Cambridge group set about devising a way of making contact to a set of 6000 narrow strips of metal that are used to create the quantum wires from the semiconducting material gallium arsenide (GaAs). This required an extra layer of metal in the shape of bridges between the strips.

By varying the magnetic field and voltage, the tunnelling from the wires to an adjacent sheet of electrons could be mapped out, and this revealed evidence for the extra curves predicted, where it can be seen as an upside-down replica of the spin curve.

These results will now be applied to better understand and control the behaviour of electrons in the building blocks of a quantum computer.

News Story Origin and Copyright: Cambridge
Click here for the original news release.
'On the mountains of truth you can never climb in vain: either you will reach a point higher up today, or you will be training your powers so that you will be able to climb higher tomorrow.'