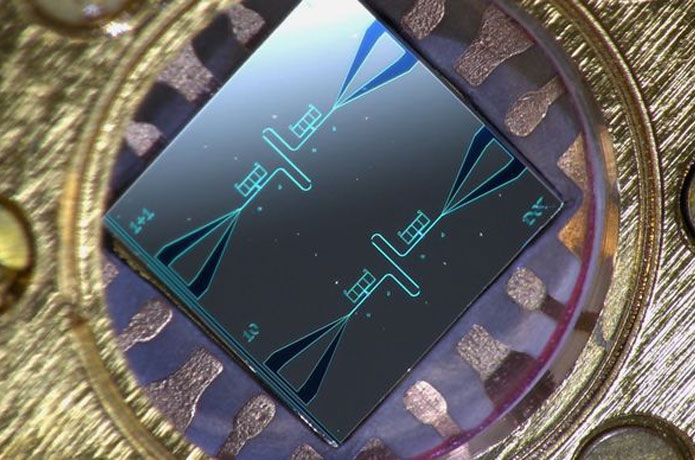 Photo of a centimeter-sized silicon chip, which has two parallel superconducting resonators and quantum-circuit refrigerators connected to them. Image: Kuan Yen Tan.

Quantum computers need to preserve quantum information for a long time to be able to crack important problems faster than a normal computer. Energy losses take the state of the qubit from 1 to 0, destroying stored quantum information at the same time. Consequently, scientists all over the globe have traditionally worked to remove all sources of energy loss—or dissipation—from these exciting machines.

Dr Mikko Möttönen from Aalto University and his research team have taken a different point of view.

‘Years ago we realized that quantum computers actually need dissipation to operate efficiently. The trick is to have it only when you need it,’ he explains

In their paper published today in Nature Physics, the scientists from Aalto University and the University of Oulu demonstrate that they can increase the dissipation rate, on demand, by a factor of thousand in a high-quality superconducting resonator—just like the ones used in prototype quantum computers.

‘The quantum-circuit refrigerator that we recently invented was the key to achieve this tunability of dissipation. Future quantum computers need a similar feature to be able to control energy loss on demand,’ says Möttönen.

Photo of a centimeter-sized silicon chip, which has two parallel superconducting resonators and quantum-circuit refrigerators connected to them. Image: Kuan Yen Tan.

According to the first author of the work, Dr Matti Silveri, the results of most scientific significance were unexpected.

‘To our great surprise, we observed a shift in the resonator frequency when we turned on the dissipation. This discovery took us on a journey to 70 years in the past, when Nobelist Willis Lamb made his first observations of small energy shifts in hydrogen atoms. We see the same physics, but for the first time in engineered quantum systems,’ explains Silveri.

Lamb’s observations were revolutionary at that time. They showed that modelling the hydrogen atom alone was not enough; electromagnetic fields must be accounted for, even though their energy is zero. This phenomenon is now confirmed also in quantum circuits.

The key to the new observation was that dissipation, and hence the energy shift, can be turned on and off. Control of such energy shifts is critical for the implementation of quantum logic and quantum computers.

‘Building a large-scale quantum computer is one of the greatest challenges of our society,’ Möttönen says.

The Quantum Computing and Devices (QCD) research team is part of the Finnish centre of excellence – Quantum Technology Finland, funded by the Academy of Finland. The experimental research was carried out at QCD Labs utilising the Finnish national OtaNano research infrastructure for micro, nano, and quatum technologies.

Dr Matti Silveri leads a group at the University of Oulu focusing on the theory of quantum simulations and superconducting quantum circuits. Dr Silveri was responsible of the theoretical model for the observations.