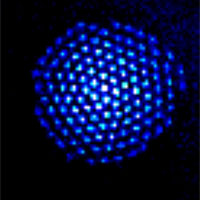 NIST physicists have built a quantum simulator made of trapped beryllium ions (charged atoms) that are proven to be entangled, a quantum phenomenon linking the properties of all the particles. The spinning crystal, about 1 millimeter wide, can contain anywhere from 20 to several hundred ions.

Physicists at the National Institute of Standards and Technology (NIST) have “entangled” or linked together the properties of up to 219 beryllium ions (charged atoms) to create a quantum simulator. The simulator is designed to model and mimic complex physics phenomena in a way that is impossible with conventional machines, even supercomputers. The techniques could also help improve atomic clocks.

The new NIST system can generate quantum entanglement in about 10 times as many ions as any previous simulators based on ions, a scale-up that is crucial for practical applications. The behavior of the entangled ions rotating in a flat crystal just 1 millimeter in diameter can also be tailored or controlled to a greater degree than before.

Described in the June 10, 2016, issue of Science, NIST’s latest simulator improves on the same research group’s 2012 version by removing most of the earlier system’s errors and instabilities, which can destroy fragile quantum effects.

“Here we get clear, indisputable proof the ions are entangled,” NIST postdoctoral researcher Justin Bohnet said. “What entanglement represents in this case is a useful resource for something else, like quantum simulation or to enhance a measurement in an atomic clock.”

In the NIST quantum simulator, ions act as quantum bits (qubits) to store information. Trapped ions are naturally suited to studies of quantum physics phenomena such as magnetism.

Quantum simulators might also help study problems such as how the universe began, how to engineer novel technologies (for instance, room-temperature superconductors or atom-scale heat engines), or accelerate the development of quantum computers. According to definitions used in the research community, quantum simulators are designed to model specific quantum processes, whereas quantum computers are universally applicable to any desired calculation.

Quantum simulators with hundreds of qubits have been made of other materials such as neutral atoms and molecules. But trapped ions offer unique advantages such as reliable preparation and detection of quantum states, long-lived states, and strong couplings among qubits at a variety of distances.

In addition to proving entanglement, the NIST team also developed the capability to make entangled ion crystals of varying sizes—ranging from 20 qubits up to hundreds. Even a slight increase in the number of particles makes simulations exponentially more complex to program and carry out. The NIST team is especially interested in modelling quantum systems of sizes just beyond the classical processing power of conventional computers.

The ion crystals are held inside a Penning trap, which confines charged particles by use of magnetic and electric fields. The ions naturally form triangular patterns, useful for studying certain types of magnetism. NIST is the only laboratory in the world generating two-dimensional arrays of more than 100 ions. Based on lessons learned in the 2012 experiment, NIST researchers designed and assembled a new trap to generate stronger and faster interactions among the ions. The interaction strength is the same for all ions in the crystal, regardless of the distances between them.

The researchers used lasers with improved position and intensity control, and more stable magnetic fields, to engineer certain dynamics in the “spin” of the ions’ electrons. Ions can be spin up (often envisioned as an arrow pointing up), spin down, or both at the same time, a quantum state called a superposition. In the experiments, all the ions are initially in independent superpositions but are not communicating with each other. As the ions interact, their spins collectively morph into an entangled state involving most, or all of the entire crystal.

Crucially, the researchers measured a sufficient level of noise reduction to verify entanglement, results that agreed with theoretical predictions. This type of entanglement is called spin squeezing because it squeezes out (removes) noise from a target measurement signal and moves it to another, less important aspect of the system. The techniques used in the simulator might someday contribute to the development of atomic clocks based on large numbers of ions (current designs use one or two ions).

“The reduction in the quantum noise is what makes this form of entanglement useful for enhancing ion and atomic clocks,” Bohnet said. “Here, spin squeezing confirms the simulator is working correctly, because it produces the quantum fluctuations we are looking for.”

The work was funded in part by the National Science Foundation, Army Research Office and Air Force Office of Scientific Research.