Making the World a Lot Quieter 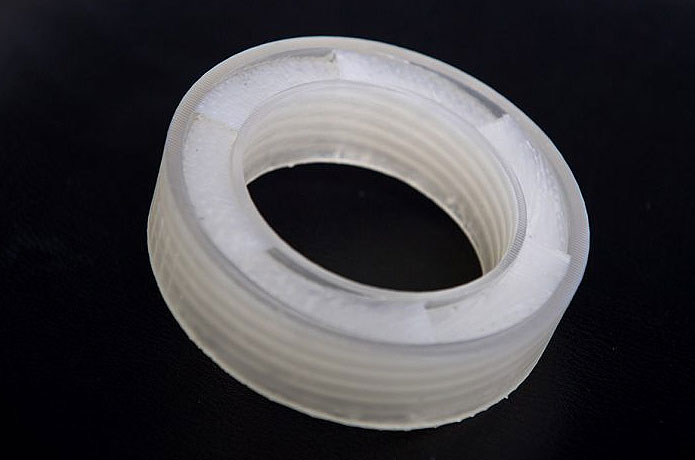 The mathematically designed, 3D-printed acoustic metamaterial is shaped in such a way that it sends incoming sounds back to where they came from, Ghaffarivardavagh and Zhang say. Inside the outer ring, a helical pattern interferes with sounds, blocking them from transmitting through the open center while preserving air’s ability to flow through. Photo by Cydney Scott

What sounds would you mute if you could? A pair of Boston University mechanical engineers are asking that question, with the ever-increasing din of drone propellers, airplane turbines, MRI machines, and urban noise pollution blaring in the mind’s ear.

“Today’s sound barriers are literally thick heavy walls,” says Reza Ghaffarivardavagh. Although noise-mitigating barricades, called sound baffles, can help drown out the whoosh of rush hour traffic or contain the symphony of music within concert hall walls, they are a clunky approach not well suited to situations where airflow is also critical. Imagine barricading a jet engine’s exhaust vent—the plane would never leave the ground. Instead, workers on the tarmac wear earplugs to protect their hearing from the deafening roar.

Xin Zhang and Ghaffarivardavagh were enticed by an alluring question: “Can we design a structure that can block noise but preserve air passage?”

Leaning on their mathematical prowess and the technology of 3D printing, it turns out they can. In a January 2019 Physical Review paper, the researchers argue that it’s quite possible to silence noise using an open, ringlike structure, created to mathematically perfect specifications, for cutting out sounds while maintaining airflow.
Numbers and noise control

“I’ve always been interested in acoustics,” says Ghaffarivardavagh, who finished his BSc in mechanical engineering at Sharif University of Technology in Tehran, Iran, before coming to Boston University for graduate school. Now, in Zhang’s lab, he’s close to finishing his PhD. “I like to work on something that I can hear or see the result. Something that I can have an impact on with issues we are facing nowadays.”

Having lived in other major cities before coming to Boston, Zhang and Ghaffarivardavagh have always marveled at the layered urban soundscape enveloping them. In Boston, the cacophony of the city is garbled together from airplanes flying overhead, the engines and horns of cars, trucks, and buses on the street, the rumble and screech of MBTA trolleys, and the hum of building appliances and power sources.

City life is so noisy, you have to find a way to create quiet moments, they say.

That got them dreaming up a sound baffle that wasn’t a barrier at all, but instead an open conduit. Such a feat could only be possible by developing a material with unusual and unnatural properties (known as a metamaterial), in this case with the ability to exert an isolated influence on sounds—an acoustic metamaterial.

“I’ve been working on metamaterials for more than a decade,” says Zhang, a multidisciplinary professor at the College of Engineering and the Photonics Center. “But it was Reza that gradually got me more excited about the fundamental idea of a marriage between acoustics and metamaterials. If you ask me and my colleagues, acoustic metamaterials is a relatively young direction…. It’s the future.”
Mute button, incarnated

Ghaffarivardavagh and Zhang let mathematics—a shared passion that has buoyed both of their engineering careers and made them well-suited research partners—guide them toward a workable design for what the acoustic metamaterial would look like.

“Sound is made by very tiny disturbances in the air. So, our goal is to silence those tiny vibrations,” Ghaffarivardavagh and Zhang say. “If we want the inside of a structure to be open air, then we have to keep in mind that this will be the pathway through which sound travels.”

They calculated the dimensions and specifications that the metamaterial would need to have in order to interfere with the transmitted sound waves, preventing sound—but not air—from being radiated through the open structure. The basic premise is that the metamaterial needs to be shaped in such a way that it sends incoming sounds back to where they came from, they say.

As a test case, they decided to create a structure that could silence sound from a loudspeaker. Based on their calculations, they modeled the physical dimensions that would most effectively silence noises. Bringing those models to life, they used 3D printing to materialize an open, noise-canceling structure made of plastic.

Trying it out in the lab, the researchers sealed the loudspeaker into one end of a PVC pipe. On the other end, the tailor-made acoustic metamaterial was fastened into the opening. With the hit of the play button, the experimental loudspeaker set-up came oh-so-quietly to life in the lab. Standing in the room, based on your sense of hearing alone, you’d never know that the loudspeaker was blasting an irritatingly high-pitched note. If, however, you peered into the PVC pipe, you would see the loudspeaker’s subwoofers thrumming away.

The metamaterial, ringing around the internal perimeter of the pipe’s mouth, worked like a mute button incarnate until the moment when Ghaffarivardavagh reached down and pulled it free. The lab suddenly echoed with the screeching of the loudspeaker’s tune.

“The moment we first placed and removed the silencer…was literally night and day,” says Jacob Nikolajczyk, who in addition to being a study coauthor and former undergraduate researcher in Zhang’s lab is a passionate vocal performer. “We had been seeing these sorts of results in our computer modeling for months—but it is one thing to see modeled sound pressure levels on a computer, and another to hear its impact yourself.”

By comparing sound levels with and without the metamaterial fastened in place, the team found that they could silence nearly all—94 percent to be exact—of the noise, making the sounds emanating from the loudspeaker imperceptible to the human ear.

Now that their prototype has proved so effective, the researchers have some big ideas about how their acoustic-silencing metamaterial could go to work making the real world quieter.

“Drones are a very hot topic,” Zhang says. Companies like Amazon are interested in using drones to deliver goods, she says, and “people are complaining about the potential noise.”

“The culprit is the upward-moving fan motion,” Ghaffarivardavagh says. “If we can put sound-silencing open structures beneath the drone fans, we can cancel out the sound radiating toward the ground.”

Closer to home—or the office—fans and HVAC systems could benefit from acoustic metamaterials that render them silent yet still enable hot or cold air to be circulated unencumbered throughout a building.

Ghaffarivardavagh and Zhang also point to the unsightliness of the sound barriers used today to reduce noise pollution from traffic and see room for an aesthetic upgrade. “Our structure is super lightweight, open, and beautiful. Each piece could be used as a tile or brick to scale up and build a sound-canceling, permeable wall,” they say.

The shape of acoustic-silencing metamaterials, based on their method, is also completely customizable, Ghaffarivardavagh says. The outer part doesn’t need to be a round ring shape in order to function.

“We can design the outer shape as a cube or hexagon, anything really,” he says. “When we want to create a wall, we will go to a hexagonal shape” that can fit together like an open-air honeycomb structure.

Such walls could help contain many types of noises. Even those from the intense vibrations of an MRI machine, Zhang says.

According to Stephan Anderson, a professor of radiology at BU School of Medicine and a coauthor of the study, the acoustic metamaterial could potentially be scaled “to fit inside the central bore of an MRI machine,” shielding patients from the sound during the imaging process.

Zhang says the possibilities are endless, since the noise mitigation method can be customized to suit nearly any environment: “The idea is that we can now mathematically design an object that can block the sounds of anything,” she says.

This work was supported by a Boston University Materials Innovation Grant and Dean’s Catalyst Award.