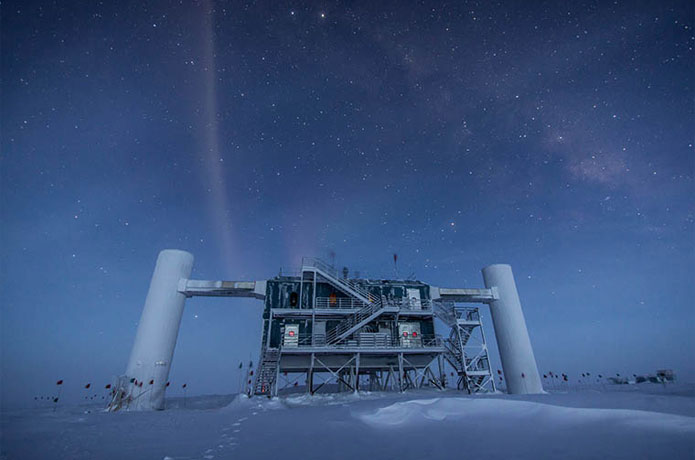 The IceCube Neutrino Observatory in Antarctica.

Physicists at Washington University in St. Louis have proposed a way to use data from ultra-high energy neutrinos to study interactions beyond the standard model of particle physics. The ‘Zee burst’ model leverages new data from large neutrino telescopes such as the IceCube Neutrino Observatory in Antarctica and its future extensions.

“Neutrinos continue to intrigue us and stretch our imagination. These ‘ghost particles’ are the least understood in the standard model, but they hold the key to what lies beyond,” said Bhupal Dev, assistant professor of physics in Arts & Sciences and author of a new study in Physical Review Letters.

Since the discovery of neutrino oscillations two decades ago, which earned the 2015 Nobel Prize in physics, scientists have made significant progress in understanding neutrino properties — but a lot of questions remain unanswered.

For example, the fact that neutrinos have such a tiny mass already requires scientists to consider theories beyond the standard model. In such theories, “neutrinos could have new nonstandard interactions with matter as they propagate through it, which will crucially affect their future precision measurements,” Dev said.

“We immediately realized that this could give us a new way to look for exotic particles, like supersymmetric partners and heavy decaying dark matter,” Dev said. For the previous several years, he had been looking for ways to find signals of new physics at different energy scales and had co-authored half a dozen papers studying the possibilities.

“The common strategy I followed in all these works was to look for anomalous features in the observed event spectrum, which could then be interpreted as a possible sign of new physics,” he said.

The most spectacular feature would be a resonance: what physicists witness as a dramatic enhancement of events in a narrow energy window. Dev devoted his time to thinking about new scenarios that could give rise to such a resonance feature. That’s where the idea for the current work came from.

In the standard model, ultra-high energy neutrinos can produce a W-boson at resonance. This process, known as the Glashow resonance, has already been seen at IceCube, according to preliminary results presented at the Neutrino 2018 conference.

“We propose that similar resonance features can be induced due to new light, charged particles, which provides a new way to probe nonstandard neutrino interactions,” Dev said.

Bursting onto the neutrino scene

Dev and his co-author Kaladi Babu at Oklahoma State University considered the Zee model, a popular model of radiative neutrino mass generation, as a prototype for their study. This model allows for charged scalars to be as light as 100 times the proton mass.

“These light, charged Zee-scalars could give rise to a Glashow-like resonance feature in the ultra-high energy neutrino event spectrum at the IceCube Neutrino Observatory,” Dev said.

Because the new resonance involves charged scalars in the Zee model, they decided to call it the ‘Zee burst.’

Yicong Sui at Washington University and Sudip Jana at Oklahoma State, both graduate students in physics and co-authors of this study, did extensive event simulations and data analysis showing that it is possible to detect such a new resonance using IceCube data.

“We need an effective exposure time of at least four times the current exposure to be sensitive enough to detect the new resonance — so that would be about 30 years with the current IceCube design, but only three years of IceCube-Gen 2,” Dev said, referring to the proposed next-generation extension of IceCube with 10 km3 detector volume.

“This is an effective way to look for the new charged scalars at IceCube, complementary to direct searches for these particles at the Large Hadron Collider.”