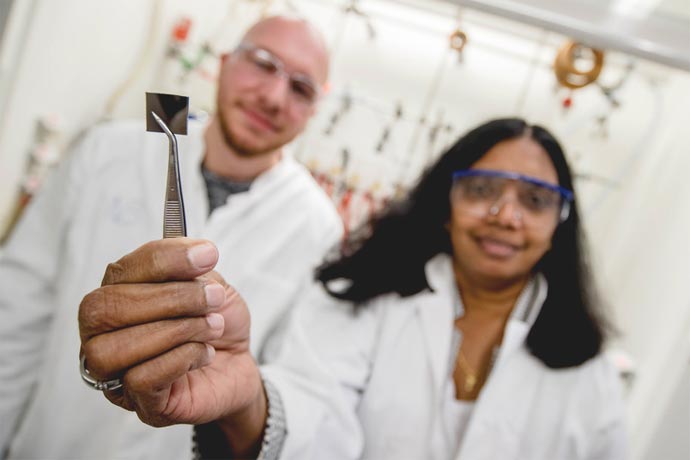 On this silicon substrate, the researchers have applied an ultra-thin layer of silver.

A new fabrication process for transparent ultra-thin silver films has been developed by researchers at Ruhr-Universität Bochum and the University of Wuppertal. The material may help build highly efficient solar cells and light-emitting diodes. However, traditional chemical methods have not been able to produce ultra-thin and pure silver films. A team headed by Professor Anjana Devi and Nils Boysen from the Bochum-based research group Inorganic Materials Chemistry, in collaboration with the group of Professor Thomas Riedl from the Chair of Electronic Devices in Wuppertal, published an article on a new synthesis method in the journal “Angewandte Chemie”. The article was published online on 27 September 2018.

“Precursors for the fabrication of ultra-thin silver films are highly sensitive to air and light,” explains Nils Boysen. The silver precursors can be stabilised with fluorine, phosphorus or oxygen. “However, these elements contaminate the thin films as well as the equipment used for the production,” continues the researcher. In the course of his Master thesis, Boysen and his colleagues developed an alternative solution to tackle the problems associated with common silver precursors.

The researchers created a chemical silver precursor, where the silver is surrounded by an amide and a carbene, which is even stable without elements like fluorine, phosphorous or oxygen. They demonstrated that a silver thin film can be applied to an electrode with the new precursor by atomic layer deposition. In the process, the gaseous precursor is transported to the electrode and a silver film is deposited there as a layer with a thickness of merely a few atoms. Because it is so thin, the silver film is transparent.

“As the process can be operated under atmospheric pressure and at low temperatures, the conditions for industrial production are quite favourable,” says Anjana Devi.

A chance for highly efficient solar cells and lights

Following a series of tests, the researchers showed that the thin silver films manufactured using this method are pure and electrically conductive. “As far as process technology is concerned, the successful synthesis of the new precursor paves the way for the development of ultra-thin silver films,” concludes Thomas Riedl. “It constitutes a first step towards the production of novel electrodes for highly efficient solar cells and lights.”

“The collaboration between the chemists from Bochum and the engineers from Wuppertal was the key to success,” stresses Anjana Devi.