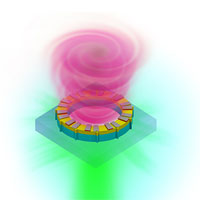 The image above shows vortex laser on a chip. Because the laser beam travels in a corkscrew pattern, encoding information into different vortex twists, it’s able to carry 10 times or more the amount of information than that of conventional lasers.
Credit: University at Buffalo.

Like a whirlpool, a new light-based communication tool carries data in a swift, circular motion.

Described in a study published today (July 28, 2016) by the journal Science, the optics advancement could become a central component of next generation computers designed to handle society’s growing demand for information sharing.

It may also be a salve to those fretting over the predicted end of Moore’s Law, the idea that researchers will find new ways to continue making computers smaller, faster and cheaper.

“To transfer more data while using less energy, we need to rethink what’s inside these machines,” says Liang Feng, PhD, assistant professor in the Department of Electrical Engineering at the University at Buffalo’s School of Engineering and Applied Sciences, and the study’s co-lead author.

The other co-lead author is Natalia M. Litchinitser, PhD, professor of electrical engineering at UB.

For decades, researchers have been able to cram evermore components onto silicon-based computer chips. Their success explains why today’s smartphones have more computing power than the world’s most powerful computers of the 1980s, which cost millions in today’s dollars and were the size of a large file cabinet.

But researchers are running into a bottleneck in which existing technology may no longer meet society’s demand for data. Predictions vary, but many suggest this could happen within the next five years.

Lasers are a central part of today’s optical communication systems. Researchers have been manipulating lasers in various ways, most commonly by funneling different signals into one path, to carry more information. But these techniques — specifically, wavelength-division multiplexing and time-division multiplexing — are also reaching their limits.

The UB-led research team is pushing laser technology forward using another light manipulation technique called orbital angular momentum, which distributes the laser in a corkscrew pattern with a vortex at the center.

Usually too large to work on today’s computers, the UB-led team was able to shrink the vortex laser to the point where it is compatible with computer chips. Because the laser beam travels in a corkscrew pattern, encoding information into different vortex twists, it’s able to carry 10 times or more the amount of information than that of conventional lasers, which move linearly.

The vortex laser is one component of many, such as advanced transmitters and receivers, which will ultimately be needed to continue building more powerful computers and datacenters.

The research was supported with grants from the U.S. Army Research Office, the U.S. Department of Energy and National Science Foundation.